The philosophy of The Helis Foundation John Scott Center 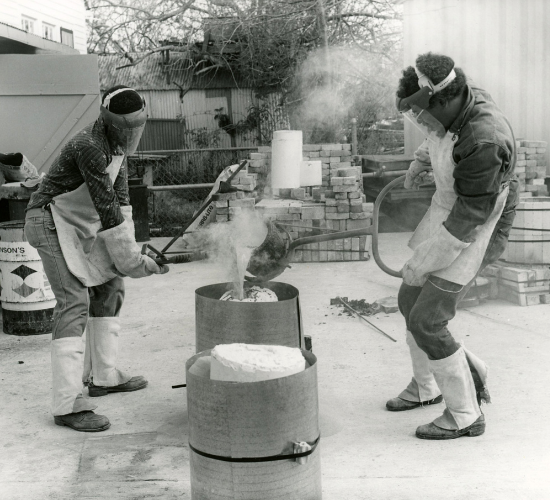 As an undergraduate art student at Xavier University of Louisiana, John T. Scott learned that “pass it on” meant that if you were given something—anything—of value, you needed to pass it on to someone else. You couldn’t keep it to yourself.

Scott wholeheartedly embraced and lived by the pass it on philosophy in his 42 years as a faculty member at Xavier and in his interactions with colleagues, students, and even strangers in both his own studios and those he visited around the world. This philosophy lives on today through his family members, former students, colleagues, collaborators, and others whose lives he touched and continues as a guiding philosophy of The Helis Foundation John Scott Center.

John T. Scott’s Philosophy of “Pass It On”

“[As an undergraduate,] I remember going up to the art department [at Xavier University of Louisiana] and a sculptor by the name of Frank Hayden… who was a dear friend of mine, he was working with Sister Lorena on a project. I remember somebody handing somebody something and they said, ‘Thank you.’ But the response was not ‘You’re welcome,’ the response was ‘Pass it on.’ I have never forgotten that. [And] the reason is that the philosophy there was the only way you can thank me for giving you something is you have to give it to somebody else. [And] that kind of philosophy is still at that school, and as long as I’m there it’ll be in the art department. It’s also in this studio and everyplace I’ve ever gone. That if you have something that’s been given to you, you’re obligated to give it to somebody else.”

“He shared with everybody that he met in a lot of different ways. His philosophy was ‘Pass it on.’ His idea of paying it forward. If you were grateful for something that someone gave you, you had to share something with somebody else to keep the universe in balance.”

Want to stay in touch? Sign up to receive emails from The Helis Foundation John Scott Center.

LEH, with the support of the State of Louisiana, is offering $5,000 grants to humanities-based organizations for the creation, updating and implementation of written emergency plans. Applications open January 16.

The LEH, authorized by the Governor and State of Louisiana, is seeking nominations for Louisiana’s next Poet Laureate. The public is welcome to submit recommendations now through February 16, 2023.